Wrapping It All Up

Well, this is it.  We have finished our 2013 Loop of visiting and sightseeing.  Now we’re onto our new life at Rainbow Plantation.  We’ll be making decisions about whether or not to build a small house, finishing Judy’s Shed for her crafting, a little landscaping here and there, and what our future travels will look like.  We are looking for a small motorhome that will enable us to travel the “back roads” and do short trips from Summerdale.

When we last posted we were in Holly, Michigan building a bridge over the Pond Koi (the goldfish pond).  From there we headed north to Petoskey, Michigan to visit with John and Della (Judy’s brother).  Other than purchase some fresh produce and a whole bunch of steaks at our favorite butcher’s, we didn’t do anything special.

Next it was off to Mecosta, Michigan for a week and a half stay at Ray and Pat’s.  We had the U joints replaced in the truck and then did a couple of visits with our son in Grand Rapids.  Brian wanted to go to the beach and Judy and I were due for a beach fix so we drove over to Grand Haven to walk out to the lighthouse.

We found a parking spot in the Park right at the foot of Main Street and began hoofing our way out to the lighthouse.  This flower garden was along the way, Judy loves her flowers.  We’ll have to work on getting one established on our lot at Rainbow Plantation. 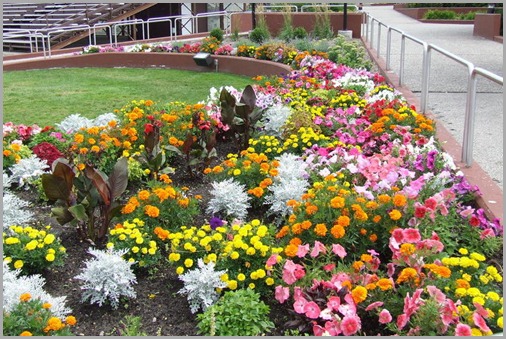 Grand Haven is Coast Guard town U.S.A..  Each year, on August 4th, there is a big celebration on the birthday of the U. S. Coast Guard.  Here are some photos of the Coast Guard Station at Grand Haven. 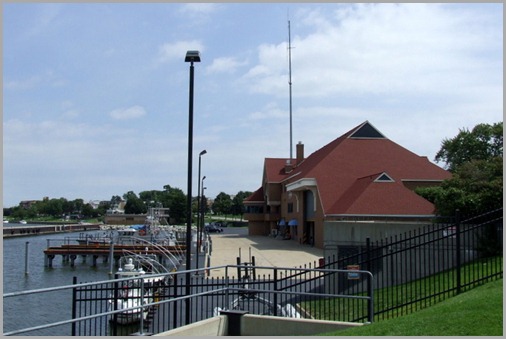 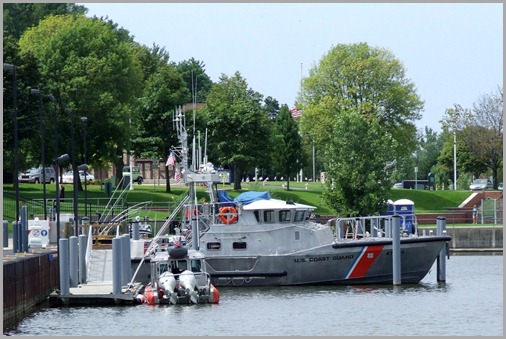 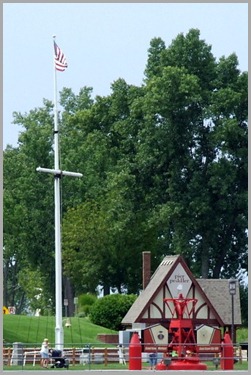 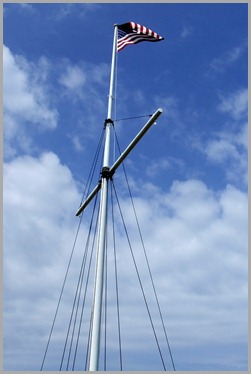 The causeway to the lighthouse runs right next to the State Park.  The park was packed with RVs parked right on the shoreline.  We didn’t think to snap any pictures of the campground, but here are a couple along the causeway. 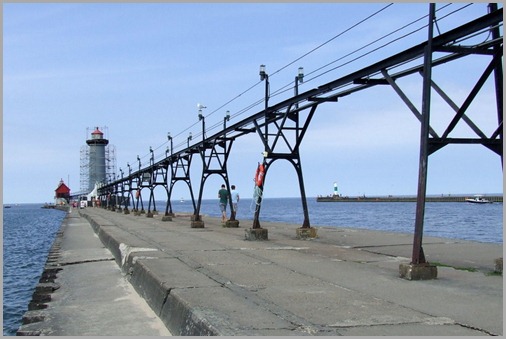 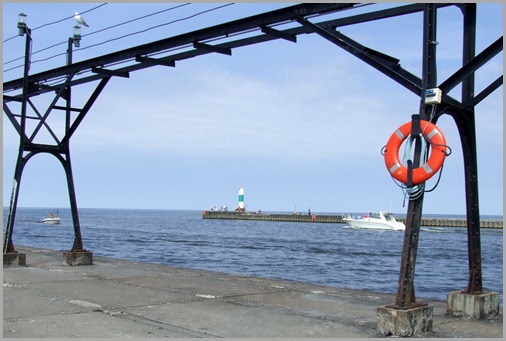 On our way back we encountered this ketch making its way out to sea (or should we say out to lake?). 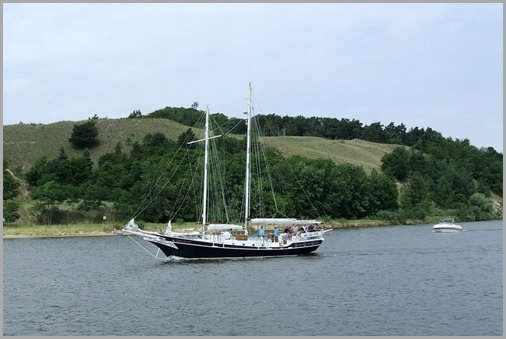 And, here is a picture of Mom and Dad with our oldest son, Brian. 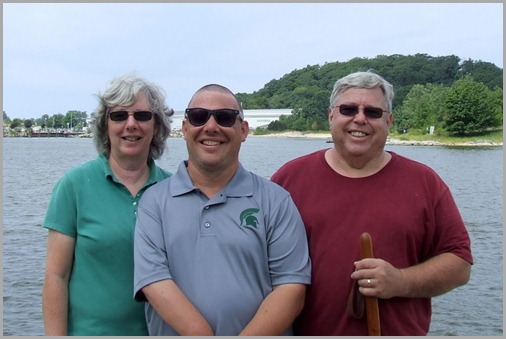 My back began acting up a couple of days before we were to leave, but we packed up the house and headed out anyway.  We drove south to Don and Gloria’s in Kokomo, Indiana where we spent a couple of days at the fairgrounds.  While in Kokomo we visited the Automobile Museum.  I limped along in much pain, but the tour was well worth it.  We were surprised at the role Kokomo played in the early days of automobile manufacturing.

From Kokomo we continued south to Grandma’s RV Park in Shepherdsville, Kentucky where we met up with Norm and Linda.  They had their granddaughter, Lily, with them; a cute precocious little four year old (and she’s real good at being four).  The five of us went to El Napol Mexican Restaurant for a mighty fine meal.  It was good to see our neighbors again; they were heading home to Rainbow Plantation on Friday.

Next on the agenda was a munchkin fix in Murfreesboro, Tennessee.  We stay at Cedars of Lebanon State Park while in the area (it’s nine miles from Matt and Jackie’s house).  The agenda was soccer practice and soccer games.  Here’s the team!!! 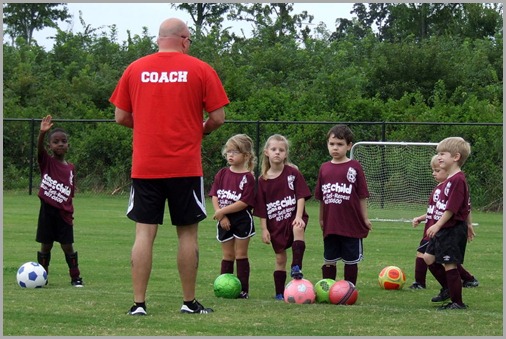 And here’s the star player!!!  (Grandpas tend to be bias) 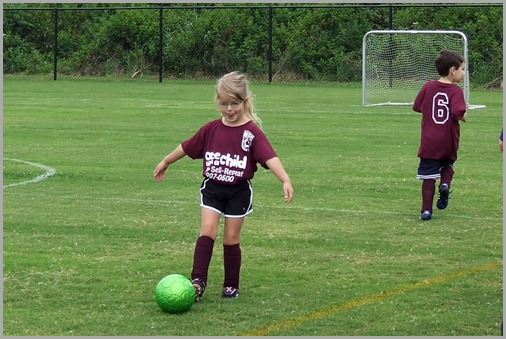 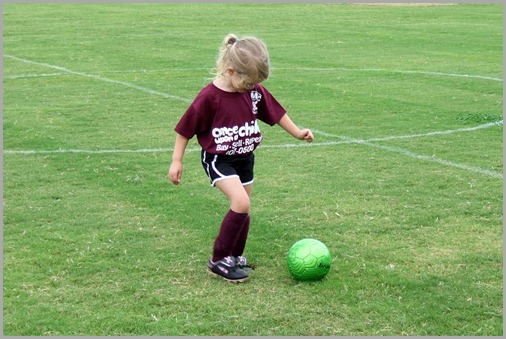 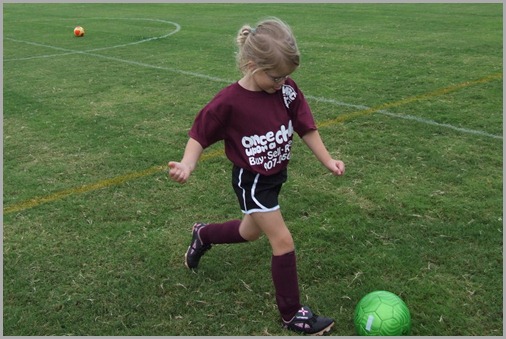 And, we’d be remiss if we didn’t include a picture of the support team – Radek and Catia!!! 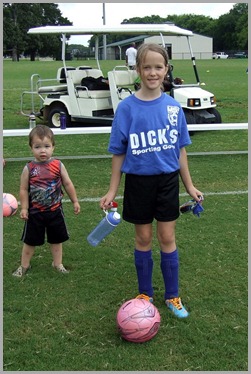 Saturday evening we worshipped at World Outreach Church and Sunday morning we attended the Armchair Church to worship at COTES (Church on the Eastern Shore).  Armchair Church is where we stay home in our recliners and watch the service on the internet.

COTES is no longer COTES.  The name has been changed to reflect the ministries of our church.  It is now 3 Circles Church.  Acts 1:8 commands us to spread the Gospel in Jerusalem (Locally), Samaria (Regionally), and to the Ends Of The Earth (Globally).  Those are the three circles of influence of our church.  We have the main campus in Fairhope where we provide for the needs of the community through evangelism, medical support, counseling, and discipleship.  We also reach out to the regional area by establishing multiple campuses.  And lastly we have established ministries in Bethlehem, Haiti, Honduras, Costa Rica, and several other locations around the world not to mention the missionaries that the church supports as well.  So the new name better fits the mission of our church as we follow Jesus’ command.

Monday we took the plunge and drove the entire eight and a half hours back to Rainbow Plantation.  Fortunately my back didn’t act up too badly while driving.  It bothers me the most when I’m standing – I can sit or I can walk (for a ways), but I cannot stand for more than five minutes before the pain becomes unbearable.  I’m going to give it the rest of the week and if it doesn’t get better, then it’s off to see the “saw bones”.  Anyway, here’s our “Welcome Home Guys” picture. 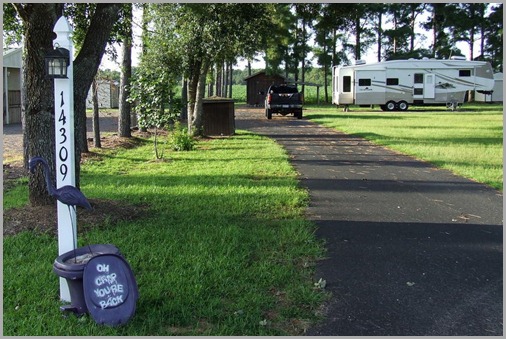 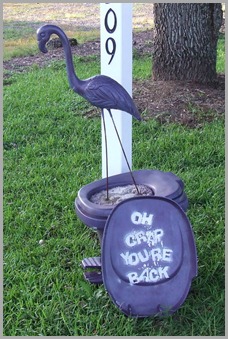 Well, there you have it.  Our travels for 2013.  We have no further traveling plans for this year, however, we may attend a rally in late October, who knows.  We know that we’ll most likely be in Murfreesboro for Christmas, but will probably not take the RV.

It was back in the fall of 2003 when we first started talking about fulltime RVing.  In July of 2006 we sold our home and moved into our custom built Cedar Creek fifthwheel.  The following October we took to the roads and have been traveling ever since.  Our travels did not turn out the way we had anticipated in that we are a family centered couple.  Therefore, we spent most of our summers traveling “up north” to visit kids, grandkids, and close relatives.  That didn’t leave us enough time or money to venture out west the way we’d planned.  But, even still, we are satisfied with our ability to see family more often than we ever did while w*rking for a living.

We will continue to travel in the future and still hope to make some trips out west, but it will be in the “vacation mode”; that is, no more than a four to six weeks at a time.  We plan to break “the loop” up into two trips, probably one to Michigan in the spring and one to Maine in the fall.  Hopefully we’ll get one more trip squeezed into the matrix in order to take in some of the beauty out west; only time will tell.  In any even, that’s it for Wandering America – I hereby surrender my quill.

May the grace of the Lord Jesus Christ, and the love of God, and the fellowship of the Holy Spirit be with all of you. (2 Cor 13.13)

Posted by Darrell and Judy Patterson at 9:12 AM