The “Bridge Over The River Kwai”

Warren and Shirley have built a nice patio deck with a pavilion over it next to their gold fish pond in the backyard.  A couple years ago, Warren was talking about building a bridge across the pond.  Last year, when he mentioned it again, I told him that we’d spend an extra day or two at their place this year so I could help him build the bridge.  So he purchased a couple of treated 2 x 12s by 20 feet long and some five-quarter decking boards last fall to let them cure in his barn over the winter months.

The first thing we had to do was cut a sixteen foot arch out of the 2 x 12s.  Then we glued and screwed the cut out portions to the top the 2 x 12s which provided the arched beams for the bridge.  After some reinforcements were added, we hoisted the bridge frame over the pond, squared it up, and leveled it off.  Once the beams were secured, we began installing the decking boards.  Viola, the “Bridge Over The Goldfish Pond”.  Another fun project behind us.  By the way, the bridge is twenty-two feet long. 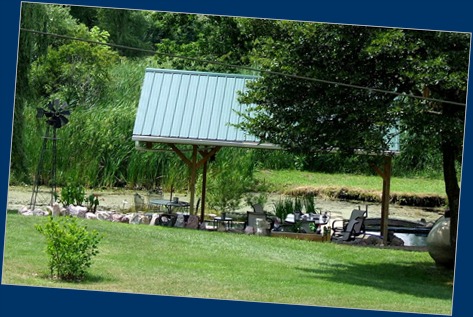 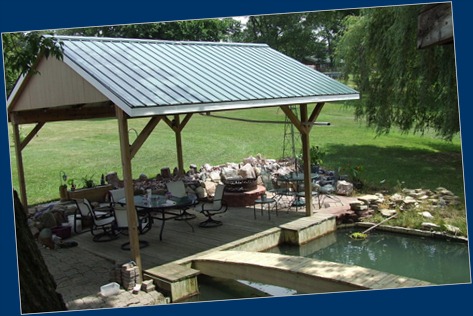 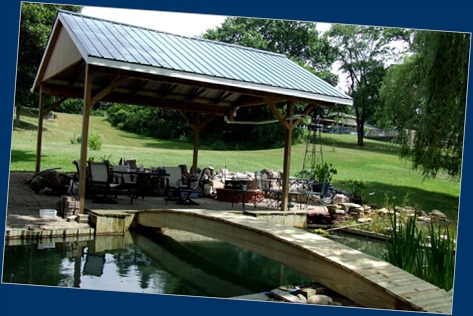 Now we find ourselves planted at Magnus Park in Petoskey, Michigan.  This is where we set up camp last summer while we workamped at Hearthside Luxury RV Resort.  We’ll be here for several days while we get our fangs sharpened (our dentist is in this area) and visit with Judy’s Brother, John, and his wife, Della.  We were supposed to get a site next to the water, but somehow we got bumped.  But, there aren’t any really bad sites here when it comes to proximity to the water.  This is a small RV Park (75 sites) and the area next to the water is open to everyone so every site has access to the shore front.

It was another uneventful travel day with us arriving before two PM.  After setting up the rig, we ventured out to get something “tweat”.  Applebee’s 2 for $20 filled the bill and, as luck would have it, Monday is draft beer for a buck and quarter day – why that’s cheaper than “pop” (as they call it in Michigan).   The meals were good and filled the bill considering we had only dined on two pieces of toast for breakfast somewhere around eight o’clock.

Next, after getting home from stuffing our faces, we took a hike about the park and sat on the beach for awhile.  That has to be right at the top of our favorite things to do.  We’ll be carrying our lawn chairs, Nooks, and a beverage of choice to the beach a couple of times while we’re here.  Why go sightseeing when there’s a beautiful bay to sit on and enjoy the ambiance of the waves washing ashore and the seagulls squawking in the background.

The grace of the Lord Jesus Christ, and the love of God, and the fellowship of the Holy Spirit be with all of you.  (2 Cor 13.13)

Posted by Darrell and Judy Patterson at 6:30 PM