The Rileys Of Connecticut

My mom was one of ten children (actually eleven but one died in infancy) of Frank and Mildred Riley of Monroe, Maine.  The Riley Clan, generally speaking, was a close knit family.  During the period of my adolescence there would be annual family gatherings.  Early on the gatherings would take place on the beaches of Lake Saint George.  In the later years they would be held at my G’Pa and G’ma’s home at City Point (or Head of the Tide) in Belfast.

Now you can only imagine the amount of people with a family of ten children and all their offspring coming together:  Bernice (Bunny) and Alton with 2 kids, Adah and Ralph with 3 kids, Edna and Tom with 9 kids, Clyde and Marge with 4 kids, Fred and Ioma with 3 kids, Doris and George with their 2 brats (that be us), Eunice and Dale with 2 kids, Walter and Bobbi with 3 kids, Howard and June with 4 kids, and Lewis and Carlene with 3 kids.  Add that all up and their would be over 55 people if everyone showed up.  Wow, that meant a lot of little Indians (Rileys) running loose.  What could possibly go wrong with that?

Now, leap forward to November and the traditional family Thanksgiving meal.  Can you imagine having that tribe holed up in your house for a huge feast.  Throw in a couple of katts and a dawg for good measure and I’m surprised that that house ever survived the attack.  There would be people eating at tables, eating on the floor, sitting on the “what not” shelf, sitting in every conceivable position in the living room, and, don’t hold me to it, but I think Grandma Riley used to eat in the bathroom with the door closed while sitting on the throne and praying for her sanity to return.  I think I begin to see why the family gatherings began to ebb away to a final end.

Anyway, after all of that introduction, we engaged, once again, in a Riley Family reunion.  This time it was with the Clyde Riley family in Litchfield, Connecticut.  Tim with his children Ellen and Mike, Cheryl and John, Rob and Bonnie and Rob’s son Eric (his son Chris couldn’t make it), Glenn and Ann Marie with their two sons Brett and Scott, and, of course, Aunt Marge.  The event was a going away gathering for Tim’s son Mike who graduated from high school this year and is going on a two year mission trip.  Judy and I were on hand to ensure that mayhem didn’t breakout, but you can be sure that if more than two Rileys gather together for more than five minutes mayhem will breakout and it did.  What fun to be there with The Rileys Of Connecticut. 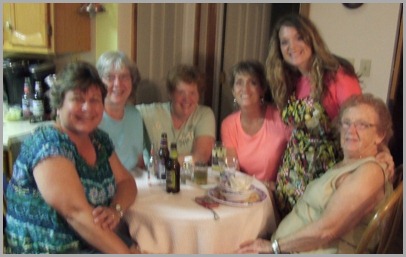 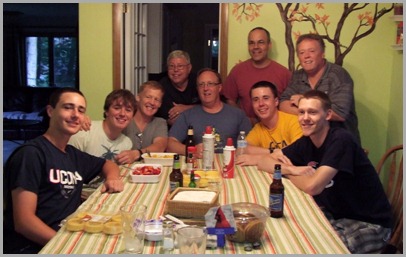 What’s next, Mrs. Landingham?  Tomorrow we’re heading for Amish Country with a one night stop over in Pennsylvania, but first we have to endure a cold front moving through the area later today which could spell some vicious thunder storms.  Oh well, what will be, will be.  It certainly has been hot for the New Englanders – pretty much the same weather that we left in Alabama a little over a month ago.  They will welcome the relief from the heat wave of 2013.

Posted by Darrell and Judy Patterson at 7:59 AM