It was over the river and through the woods to Scenic Hills RV Park we went.  Actually, it was over many rivers and through a lot of woods.  We, also, experienced that “Pennsylvania Appalachian Mountain High” (how about that, John Denver?) as we passed over the highest point on I-80 East around mile marker 110 in Pennsylvania (2250 feet above sea level).  It began raining just before we hit Akron and it continued to drizzle as we passed through Canton (“Hi” National Football Hall of Fame), made our way across route 39, and “set up camp” at Scenic Hills.  Then it burst forth with pouring down rain.

The rain didn’t stop us though. “Feed Me” showed up so we backtracked a few miles to the Der Dutchman Restaurant in Walnut Creek. The Special Of The Day was smothered chicken with two sides and butterscotch pudding. They use nothing but the finest Amish grown chicken that is fed NO preservatives or by-products. Along with the chicken, we had “smashed” taters with gravy, green beans, and Amish stuffing with gravy. Everything was ummm, ummm good. 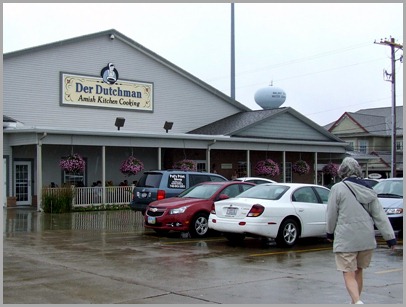 Here’s our site at Scenic Hills and Judy’s sign.  She just had to have a picture of this sign – quite appropriate for Amish country.  By the way, you can “double click” any picture to see it in full size. 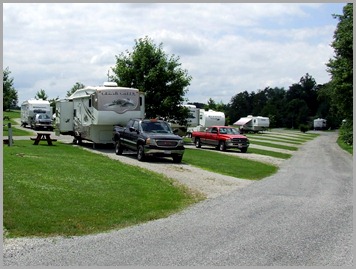 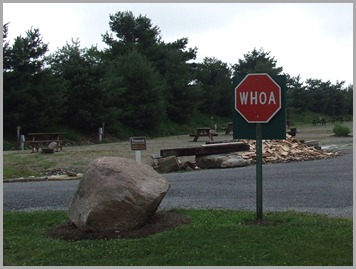 Our Monday outing was to Miller’s Fabric, Keim’s Hardware, Lehman’s, and Heini Cheese.  While Judy looked around in Miller’s Fabric, I walked down the street to a market to get some freshly squeezed coffee and then I walked back and sat in the Amish rockers on the front porch to watch the cars go by.  Judy found some fabric and a pattern that seemed to make their way to the truck.  Keim  Hardware was impressive, but we didn’t have need of anything in there, however, we “poked” around in there for awhile. 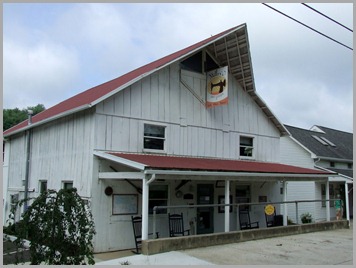 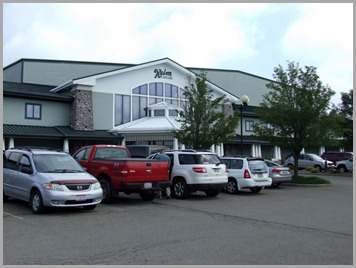 Then we headed north to Kidron, Ohio which is home to Lehman’s which is an old fashioned type of hardware / houseware kind of place.  A meat tenderize (hammer type) and a bag of Amish popping corn left with us.  Keim’s was an impressive hardware store, but Lehman’s was a lot more fun.  Lastly, we stopped at Heini Cheese factory where you can spend time testing the wares before making a purchase.  We bought some garlic cheddar cheese and some teriyaki beef sticks. 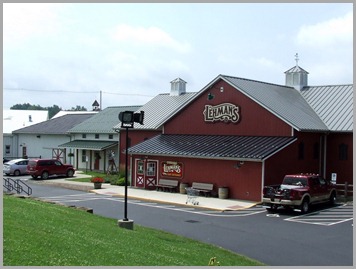 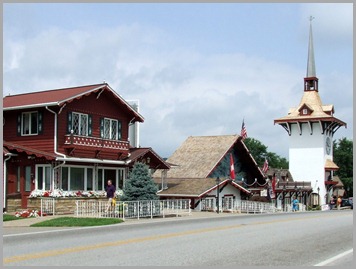 On our way home we stopped at Troyer’s Market for a loaf Amish bread to make some turkey sandwiches.  Three and a half hours was enough for one day – a sandwich, a nap, and some reading rounded out the afternoon.

On Tuesday we got an early start and made our way back to Der Dutchman for some cream sticks that were highly recommended by Paul and Margery.  They were right, the cream sticks were scrumptious.  We journeyed across the street to The Carlisle gift shop.  This is a unique building, both inside and out. 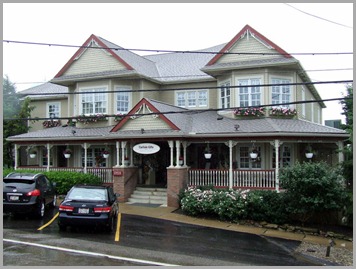 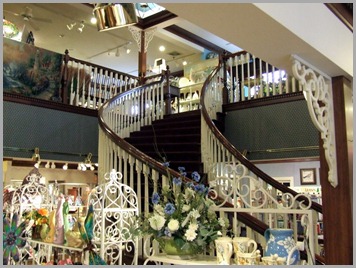 Being in Amish country, we wanted to see some of the Amish farmland so we drove the back roads to Sugarcreek.  Here’s what we found. 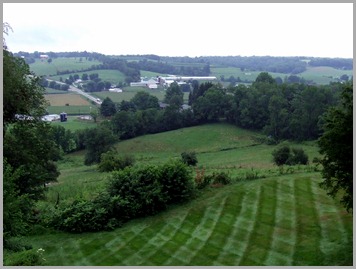 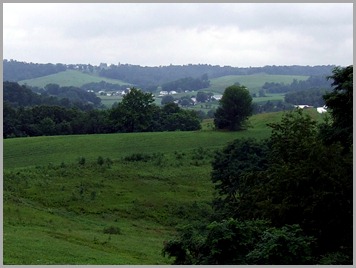 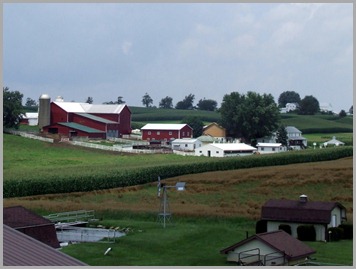 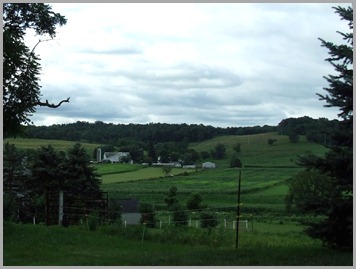 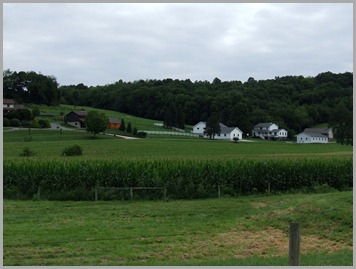 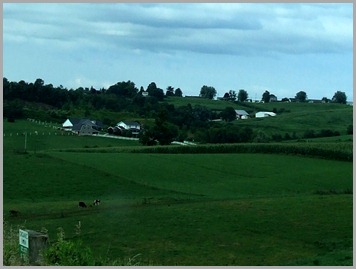 Sugarcreek is a cute little village with a Swiss influence.  The highlight of the village is the time piece in the center of town.  On the half hour a band comes out of the Cuckoo style house and plays a number while the couple on the left dance.  Once they finish, they all go back inside the huge clock. 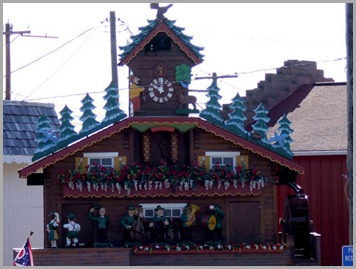 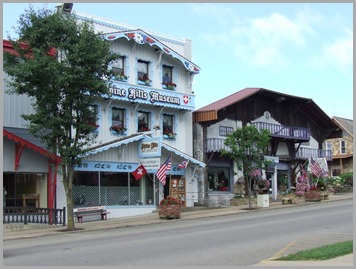 On our way back home, we stopped at the Coblentz Chocolate Company to get something for our “sweet tooth” and Walnut Creek Cheese, another huge emporium with tons of stuff; similar to Lehman’s only on a slightly smaller scale.  There’s also a grocery store in there so we purchased a couple boneless pork chops, some fresh mushrooms, and a gravy mix for our dinner.  We had planned to go to Chalet in the Hills for some Jaegerschnitzel, but I decided that I would make our own and I must say, it was scrumptious and a whole lot cheaper. 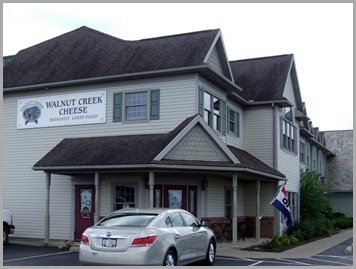 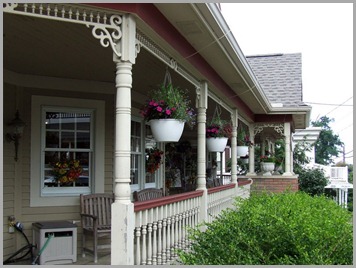 Now here’s something that you don’t see everyday.  It’s a mother deer nursing her lamb.  I took this picture in the field that was right across the road from our campsite. 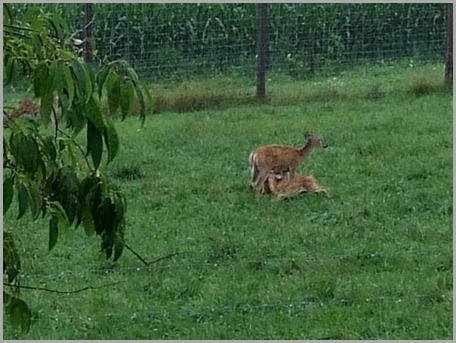 So we’ve been good little tourists and visited lots of shops, spent some money, and took lots of pictures.  The economy here in Holmes county, Ohio is a little healthier.  Now it’s onto Judy’s sister’s in Holly, Michigan.

Posted by Darrell and Judy Patterson at 6:10 PM