That’s right, after two back to back days of driving, approximately 400 miles each, we are now in Vacationland - Maine, the way life should be!  Maine, worth a visit, worth a lifetime!

Once entering New England we could see the signallings in the air of the season to come.  Thats right, Cheeze-it signs were beginning to bloom heavily along the sides of the highways indicating some serious orange cone placement, shovel leaning, and road rearrangement is about to take place.  Yep, construction season is looming just around the corner and about to burst forth in full force on the New England scene.

We arrived at Mike and Peggy’s at just a little after three in the afternoon so we could top off the potable water tank.  Then it was over to the Fairgrounds where we got a 30 amp electric site (no water, no sewer).  It’s too early to start thinking about camping in Maine as most camping areas are not ready for guests before May 1st.

Once getting the rig positioned on a fairly level piece of terra firma and the power turned on, Mikee and I proceeded to investigate the landing gear problem.  After a few turns of a screwdriver and a couple of wrenches, all the bolting had been removed.  The culprit gear box may not be the problem after all.  The drive shaft is broken which leads to an altogether new problem.

The part will only cost around seven dollars, but there is a “wait factor” involved as the it will have to be put on order.  Then comes the question as to why the shaft broke in the first place?  And why the gear box was “slipping”?  But, first we need to get the landing gear leg out of the RV which we will tackle this very AM.  The “long pole in the tent” in completing this project will be the “wait time” for replacement parts.  Stay tuned, more to come.

After getting ourselves dirty, Mikee, Judy, and I headed back to the ranch for some grub.  Grub in this case was spaghetti with a tasty homemade sauce straight from the kitchen of Peggy.  She, also, prepared a wonderful spinach garden type salad, and some hot out of the oven rolls.  With a nice dish of Moose Tracks to round out the meal, we were a bunch of satisfied eager eaters.  Can anybody spell S-L-E-E-P-Y-T-I-M-E?

Mike has loaned us his truck to use until we can get the RV dislodged from our truck.  That may very well be today.  We are talking about doing the “red neck thang”; that is, putting the front of the rig “up on blocks”.  Then all we would need is a couple of hound dawgs sleeping under the front porch to complete the picture (maybe some grass up to your a--, eh I mean knees).

What can I say, I think Mike and Peggy have definitely earned a nice hot bowl of lobstah stew and April is the best time of year for lobstahs in Maine, IMO.  I think we will just have to set sail to the sea shore and rustle up a bunch of them thar Maine lobstahs before the week’s out.  Then set our compass toward Hannaford Brothers for the rest of the ingredients.  We may just have to snag a couple of extra lobstahs to make some lobstah rolls to go with that stew.  Maine is one place where you can actually buy real live hot dawg rolls (not buns) that make up some mighty fine eatin’ lobstah rolls.  Sounds like yummy plan to me.

Here’s a picture of this morning’s sunrise taken from right out our front door at around 6:20 AM.  The sun has since hidden itself behind a heavy blanket of clouds.  We have a ninety percent chance of rain forecasted for this afternoon. 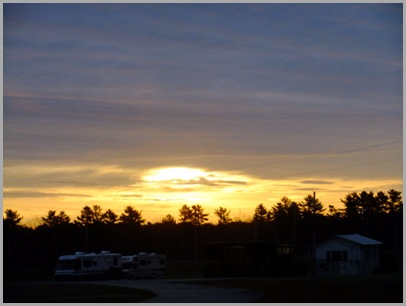 Posted by Darrell and Judy Patterson at 6:19 AM