Yesterday was Kalina day.  Judy and I picked up Murfreesboro grand daughter number two and headed for the nearest playground.  When we turned into the parking lot, her eyes lit up as she’ll yelled, “Playground!!” with a great big smile on her face.  Kalina likes her playgrounds, that’s for sure.

Slides are her favorite and this playground had several different slides to chose from. 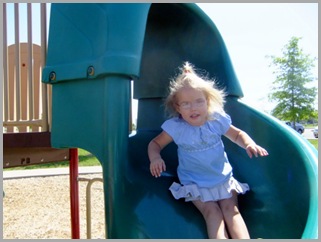 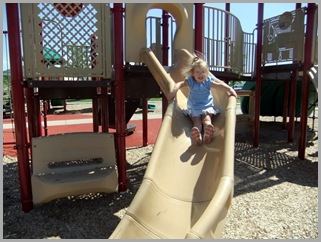 The problem is that they are all plastic.  Do you know what a plastic slide does to one’s hair? 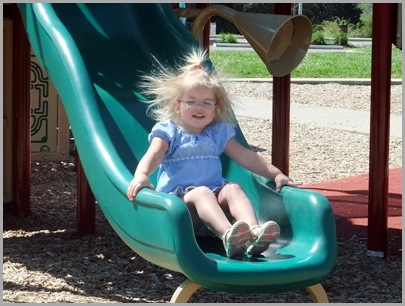 A one point Kalina said she was tired, but that wouldn’t stop her.  She just denied that the word was ever uttered and kept on going like the Energizer Bunny. 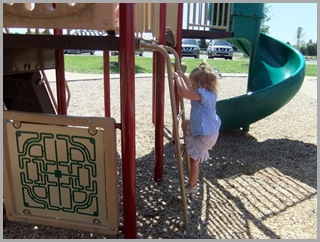 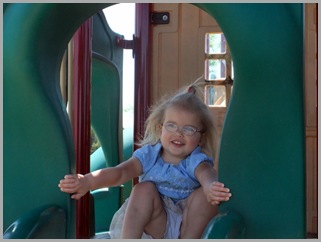 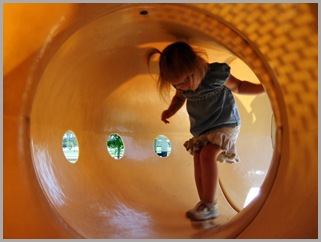 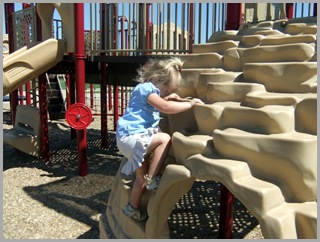 Finally it was time to “Feed Me” so we watched her eyes light up once again as we turned into the Golden Arches.  Kalina had the chicken tenders kid’s meal with apple juice.  Have you ever tasted McDonald’s chicken tenders?  Those have to be the worse tasting, poorest excuse for food that ever donned the face of this earth – the taste is pretty much akin to that of cardboard.  It’s a good thing that “they” give you some barbecue sauce to hide the lack of flavor.  If it weren’t for the toy inside the box, I don’t think that “they” would ever sell a happy (yucky) meal.

Next we had to swing by UPS to drop of a package.  On our way home, someone fell asleep and it wasn’t Grandma (although she had thoughts about just that).  Kalina got just enough sleep to keep her from sleeping at nap time – sorry mom, grand parents get to do that.

We came home and spent the rest of the day reading and visiting with our neighbors - met some real nice folks.  Next to us is a couple of sisters who just enjoy getting out of the house for a few weekends each year.  A few sites behind us is another Escapees couple from Bardstown, Kentucky (just outside of Louisville).  Also, nice folks.

Posted by Darrell and Judy Patterson at 8:12 AM