The State Of Our Union

It’s really great when the stars align.  We arrived in Maine on Friday with no further coolant issues (just not sure when that’s going to jump up and bite us in the posterior), it only took Mike and I about an hour’s worth of labor on Friday and Saturday to get the landing gear leg out of the RV (probably another hour’s worth of time assessing the problem and determining the fix), and the TV decided that it wasn’t really broken after all (no idea what that issue was all about but the TV works just fine).

The replacement shaft for the landing gear will be in on Tuesday so by Wednesday (at the latest) everything should be reassembled and operational.  Atwood has redesigned the drive shaft eliminating a grove for installing a “keeper ring” (which was at the point where the shaft broke).  Our assumption is that shaft breakage had been a problem in the past and that’s why they redesigned it.

In the meantime, while we are waiting for the new shaft to arrive, Mike and I are going to put the gear box through some stress testing to ensure that is functioning correctly.   And, also, we will test the leg by running it up and down to insure that there is nothing hanging up inside of the tube.

Anywhoo, that’s all for now on the landing gear.  Now for the coolant issue – I will do some serious under body crawling about to see if I can spot any leakage what so ever.  The coolant in the reservoir is low, however, the temperature gauge indicates that everything is doing it’s job and there has been no “low coolant” warning light.  But, something is “rotten in Denmark!!!” and I hope to resolve the issue before we leave Maine at the end of July.

Now, for the television.  I had researched and found a replacement TV the same size as our current set and was about to purchase said TV, but when I went to show Mikee what the darned thing was doing (or not doing) it worked just fine.  The only thing we can figure is that we must have had a low power situation.  I should have checked that out while we were in Virginia but I was concentrating heavily on the landing gear issue – one issue at a time please, I don’t multi-task very well any more.  In any event, the TV is back and we don’t need to buy a new one.

Mike and Peggy invited us to join them in a family cookout on Saturday – ribs, beans, salads, breads, the works!!!  All three of their children (spouses and grand kids) are in town so this was a real family reunion.  We had a wonderful time joining in with them.

Yesterday we attended First Baptist Church of Freeport (our home church when we lived in Maine way back in the nineties).  Pastor Sandy was in good form deliving a wonderful sermon and we were able to catch up with several people from our past.  We’ll be worshipping with them over the next eight weeks so we picked up our Bible School materials.  We really look forward to spending the next couple of months in this area.

After church we decided to visit Captain Mike’s for dinner.  A phone call to Mike and Peggy discovered that they had had the same idea and were just being seated at a table for four – two extra chairs.  So we made our way there post haste.  Peggy had baked haddock, Judy had fried Maine shrimp, and Mike and I had the baked stuffed scallops.  It was “Oh So Good”.

We spent the afternoon relaxing, reading, and watching the Celtics in the playoffs – they won.  For dinner we decided to walk over to Dairy Queen for a Peanut Buster Parfait – yummy.

So, that brings you up to date for the past three days.  I know, pictures would have been wonderful, but we’ve been negligent in taking our camera along on our outings – we’ll try to do better from now on.  But, in the meantime here are a couple of “Easter” pictures of our grand children. 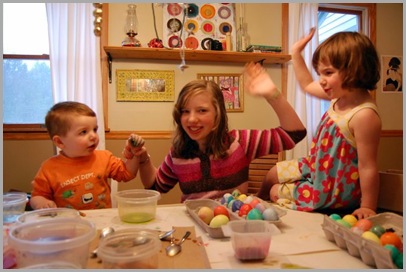 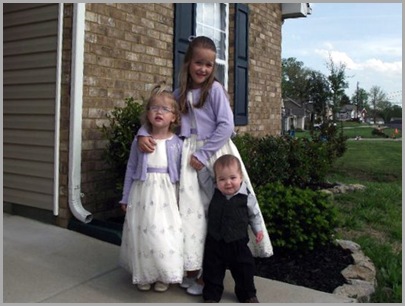 Posted by Darrell and Judy Patterson at 6:20 AM