Not An Uneventful Day

We had a farewell breakfast with Mike and Shauna.  Mike cooked up some bacon and French toast that we covered with “real live” maple syrup.  Along with coffee and conversation, it was a great breakfast.  After a few hugs and “see ya next years” it was on the road again for an eighty mile trek.

It may have been a short travel day, but it was by far not an uneventful one.  Just as we were approaching Topsham the “Low Coolant” light came on in the truck.  We’ve been battling the “Low Coolant” light for two years now and thought that we had seen the last of it back in the summer of 2008 when we had the water pump rebuilt, then again in February of this year when we had the water pump replaced, and once again in April when we had a hose replaced.  But, here it is again flashing in my face – aarrgghhh!

The good news is that I will be able to fix the problem today when the new upper radiator hose arrives at the local NAPA store.  In following the coolant leakage trail I discovered a crack in the hose where coolant “squirts” out when the pressure builds up in the system.  I should be able to replace it with minimal effort within about a half hours time.

The other issue we encountered was that the stove was sliding out from the cabinet in the RV.  Another great Forest River lack of quality control.  First of all “they” use those dang staples and don’t bother to glue anything together during the assembly process so one of the supports that the stove bolts to had pulled away from the cabinet base.  On top of that, the stove has only two places where it can be screwed to the supports and “they” had only screwed in the left side of the stove.  One screw holding the stove to a stapled support with no glue – shame on you, Forest River.

The good news is, it took me less than a half hour to remount the stove by drilling some additional holes and installing four screws going through the stove and the supports right into the cabinet base.  It won’t come out again until I’m darned good and ready to take it out.  Sheesh!!!

Okay, so now I’m done whining.  Once we were all set up, Peggy came over for a visit.  It wasn’t long before we made a food run to the Cabin Pizza for a Shrimp Scampi pizza.  Boy, that cheered me up in a hurry.  It’s been years since we’ve had one of those Shrimp Scampi Pizzas and it was just as good as we remembered.  I’m still licking my chops over that one. 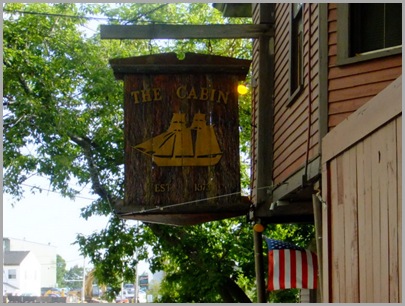 Last night it was just the old routine thus ending another day in the life.  All in all it was a good day with a couple of little inconveniences along the way that were quickly placed behind us.

Mikee comes home today and I have no idea what we’ll be doing so you’ll have to join us again tomorrow to find out.  And, that’s it for today!

Posted by Darrell and Judy Patterson at 7:16 AM