A Soft Landing And Nice Friends

We took off at nine hundred hours yesterday morning and set our course in a northerly direction with Green River Lake State Park in Campbellsville, Kentucky being our landing field.  After flying two and a half hours on secondary roads, we arrived safely.  However, we did manage to loose an hour just south of the campground when we flew into the Eastern Time Zone.

Green River Lake State Park is a beautiful park with nice sized level sites.  Here is a photograph of our site along with Thurman and Phyllis’ rig (on the left). 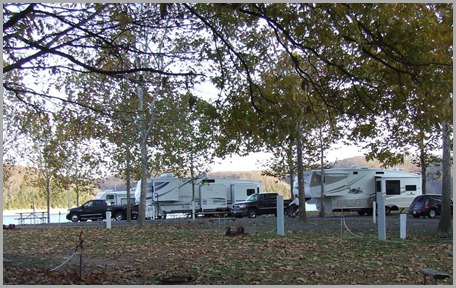 And this is the view from our patio. 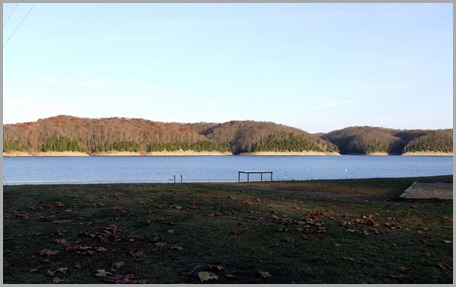 Here is a picture of Green River Lake from the shoreline.  This is a man made lake having been created by a dam on the Green River constructed by the Corps of Engineers. 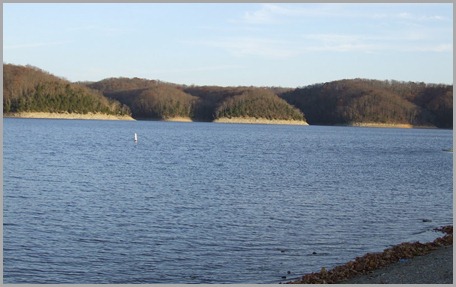 Thurman and Phyllis were excited to see us.  It has been a just over a year since we last met up with them last at Lake George Escape.  We had workamped with them at LGE in 2007, 2008, and 2009 and visited with them at LGE during July of 2010 when we were touring with our grand daughter Briana.

They wanted to show us around so we headed into town.  Thurman did a drive by of the Amazon facility which is three foot ball fields long and three wide (150 by 300 yards) and four floors high.  It’s no wonder that one can rack up some mileage while retrieving products in this place.

Next on the agenda was lunch so we made a pit stop at the local Subway store.  Being Veteran’s Day, my sandwich was free, however, we can tell you one thing right now, they may have a lot of good sandwiches at Subway, but Philly Cheese Steak is not one of them (I guess you get what you pay for).  Anyhow, once we were all back in the truck, T&P pointed out Uncle Wally’s, Kroger, the local Laundromat, and several good eateries.  Basically, we got a tour of the “lay of the land”.

You can see the sunrise from our site, but not the sunset.  However, there is a turnout just up the road from the campground where you can see it, so here’s a couple of shots of last night’s sunset.  Maybe one of these mornings I’ll shake the cobwebs out of my mind and snap a few pictures of the sunrise. 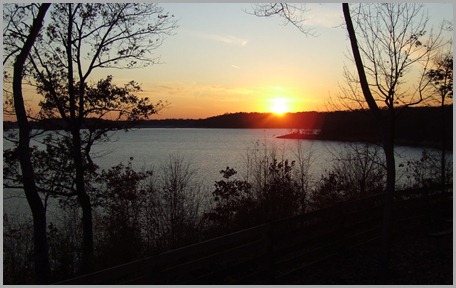 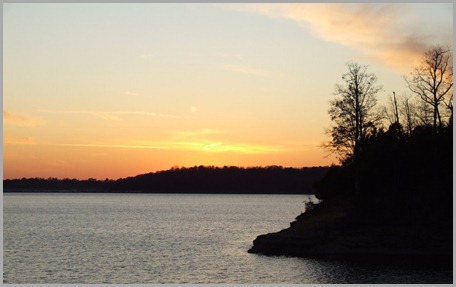 Today we’re going grocery shopping at both Walmart and Kroger (Kroger is one of our favorite grocery stores).  Then we’ll do some household chores and, if it is warm enough, we just may sit outside in this idyllic setting and do some reading.  Once we begin w*rking, we’ll be going to w*rk in the dark and coming home in the dark so we’d better enjoy it while we have the chance.  According to the weather dudes, it’s supposed to be warming up so it should be a nice weekend to be outside.

Hopefully, during the next few weeks we’ll get in a little exploring.  There are some hiking trails that traverse along the lake side.  We’d need to take advantage of them now because once we begin our ten hour hiking program with Amazon we’ll probably not look forward to a bus man’s holiday even if there’s a change of scenery.

Further, we would like to get in a little sight seeing.  Lincoln’s birthplace is not far from here and there are several Civil War battlefields nearby.  Maybe we can find a winery or two where we can taste the wares.  We’re not sure how far away the bourbon trail is, but there maybe a couple of distilleries close by as well – we’ll need to check it out.

Posted by Darrell and Judy Patterson at 5:58 AM